The final Petals and Thorns playtest video goes up today. It wound up slightly shorter than the twelve sessions I originally expected, but the party did skip the sahuagin dungeon (they’re more aggressive in the version that’s being Kickstarted now, since I can’t really argue with my party’s logic of “well, seems like so long as everyone stays away from the river they’re pretty harmless, so why should we risk our lives for this?”).

Today in Petals and Thorns the party ventures forth into the catacombs to complete an easy quest that I probably should’ve directed them to way earlier in the game. In fairness, I actually did direct them to the Order of the Bear, and they decided to wander off the road and into the spider cave instead, so maybe directing these guys is a useless endeavor to begin with.

I’m gonna go ahead and keep posting Petals and Thorns videos for as long as they’ll last in order to get some quick and easy posts out of it while also wrapping up that series in a hurry. I’m still hoping to get some regular articles out during this Kickstarter, but I’m not sure I can make any promises. I’ve hit my funding goal way faster than expected, which means I need to figure out some stretch goals fast. That’s an awesome problem to have, but it may still eat into the time set aside for blogging. The “good” news is that Kickstarters usually slow down a lot towards the middle, so while this first week might see my backers breaking through stretch goals faster than I can get in touch with artists to nail down quotes for them, it probably won’t be a problem for the whole month.

Petals and Thorns ep. 8 is here: 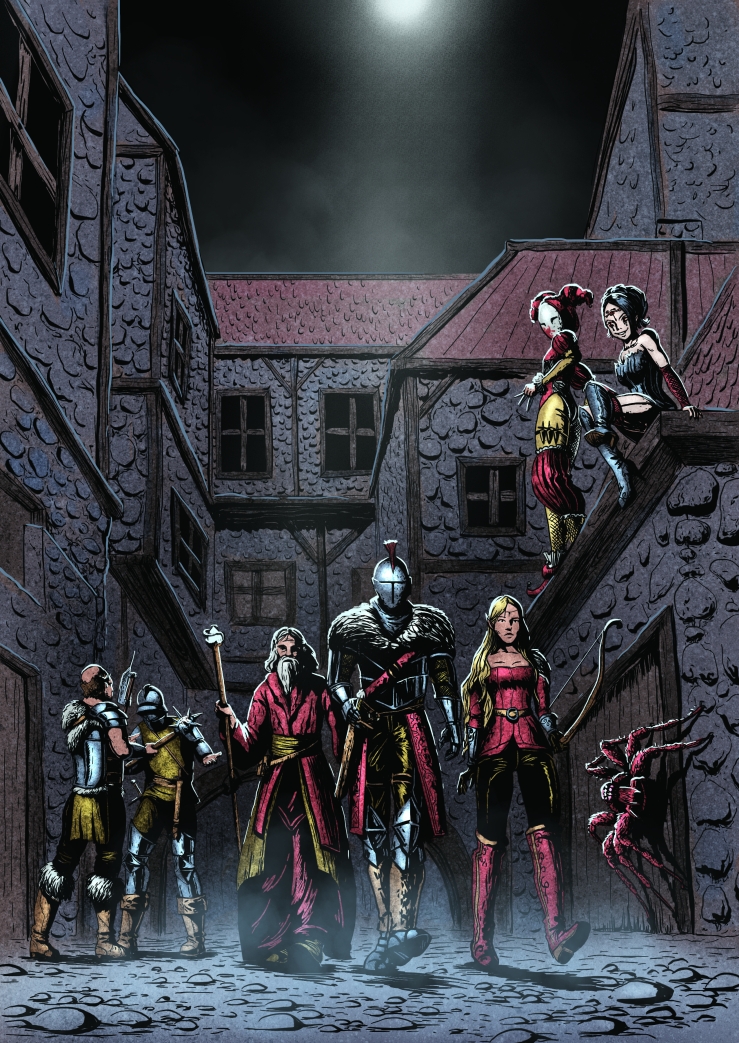 The Petals and Thorns Kickstarter is now live. You can click on the image above or these words here to get to the page and see what’s all up with that. If you play D&D 5e, you should consider buying it. For that matter, if you play other editions of D&D, you should consider buying it to read and maybe adapt certain elements into your homebrew campaign. Personally, I’ve got an entire Humble Bundle’s worth of Frog God stuff that’ll probably never see actual play, but it was still fun to read, so I figure there’s probably a market for that.

This thing hit 80% funding in six hours, requiring less than $100 to be fully funded. It will be five hours away from the end of its first day when this post goes live. I’m hoping to get it funded in the first 24 hours, so if it’s still not there by the time this post goes live (or if it is and you want to be helpful anyway), post this link anyplace interested in tabletop RPGs you know about, or drop a $1 pledge in (although, as mentioned above, if you play 5e or just like to read D&D adventures, you should take a look at the Kickstarter page and consider actually buying it for $15 – that’s $5 less than what it’ll sell for once brought to market). Kickstarter pushes projects according to how many backers they have, not how much money they’ve raised, so a pocket change $1 pledge hits way above its weight level in terms of showing support.

Edit from 90 minutes before this post goes live: I am 100% funded in 12 hours. It is perhaps counterintuitive, but this means that $1 pledges are more important than ever. I mean, obviously $15 or $50 or $400 pledges are even better, but not by nearly as much as you’d think. My Kickstarter has been incredibly successful and that’s great, major thanks to everyone who’s already pledged, however with its current backer count it won’t sustain its momentum. The most important thing to this project right now is more backers, at any pledge level, so that we can sustain some momentum into the doldrums of the middle weeks and avoid falling apart.

Ordinarily this would’ve gone up six hours earlier, but unfortunately when I left the uploads to run in the morning, something went wrong and they weren’t finished by noon. I’m sure all the fans of my streaming are deeply disappointed.

Today in Petals and Thorns, the Order of the Bear meets their fate:

In Iron Fang Invasion, I got bored of the AP and decided to just make an army and throw it at the party and see what happens:

Today, in Petals and Thorns, the party returns to fight with the spiders and clear the nest, and find a ranger and a vampire arguing with one another they had not anticipated:

In Iron Fang Invasion, the party storms the tower of a wizard with evil tables:

Having beaten the Order of the Bear back from Ramshorn, the party sets about hunting down their patrols throughout the Ramshorn wilderness, hoping to slowly whittle them down until they are thinned out enough to make a final assault on their camps to the north winnable.

In Iron Fang Invasion, the party kills a dragon.

Today in Petals and Thorns, no sooner has the party recovered from the loss of their ally Elisha when the Order of the Bear launches a punitive attack on Ramshorn. Joined by many new hirelings, they desperately fight to keep the town from being burnt to cinders.

Meanwhile, in Iron Fang Invasion, the party avenges themselves for the loss of that one guy and finally defeats Scarvinious, securing the people of Phaedar against retaliation. At least until the hobgoblins rebuild that bridge.

Looks like I’ve got the hang of this “scheduling YouTube videos in advance” thing. This week, the party bites off more than they can chew.

As well as the ongoing adventures of the Iron Fang Invasion, in which the party wonders if maybe the people who slaughter a cavern full of locals just to turn their home into a base of operations for their terrorist guerilla campaign against unrelated enemies might not be the good guys:

I recorded two games that I ran as an effort to demonstrate my professional GMing skillz. Unfortunately, that demonstration is being held back by the fact that a decade of experience with GMing is desperately struggling to make itself known through the rank amateur quality of my video editing, which I’ve been doing for, like, a month. Music is so loud you can barely hear me and my players in Iron Fang, and so quiet that you can barely hear it in Petals and Thorns, which is particularly egregious in the opening narration, which desperately needs that background music in order to give it energy. Matching narration to good music in order to keep it short and make it engaging is one of my oldest GM tricks, but with the background music barely audible this video mainly serves to demonstrate why the narration on its own isn’t enough.

I figure I may as well post them since I’ve got ’em, but I’m not satisfied.