Today we are finishing our look at the connections between Final Fantasy XII espers and the main villains of every previous game in the series (including spin-off game Final Fantasy Tactics), as proposed by this chart: 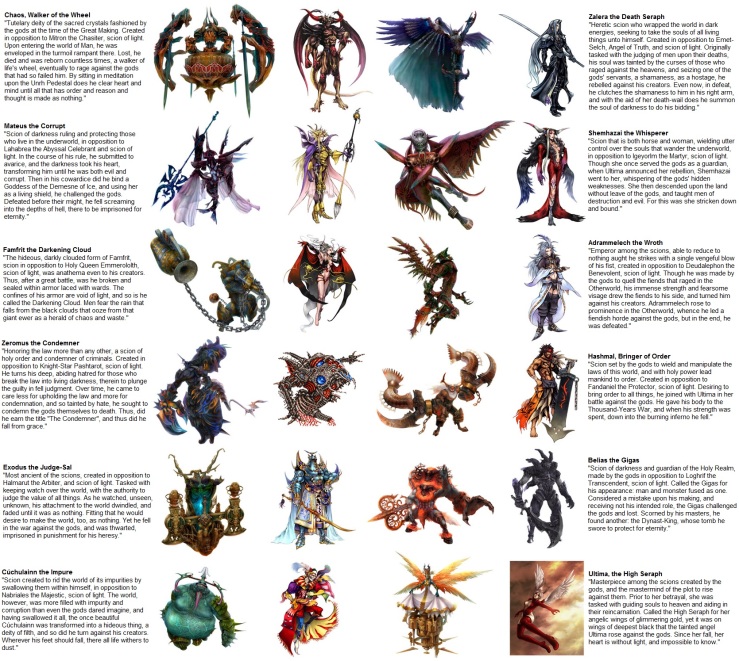 Today, we’re looking at Adrammelech, Hashmal, Belias, and Ultima, and here we’re getting into territory where nearly every esper/villain match-up is one I disagree with. I’ll note just in case here that I require all comments to be approved before appearing on the blog, however that’s not because I have any particular intention to suppress discussion, but because genuine comments are actually slightly less common than spam. If the post gets any kind of traction at all, I anticipate it’ll cause some discussion, so don’t panic if your comments aren’t showing up. If you’re not a spambot, I’ll approve you, and if a real discussion gets going on this blog, I’ll lift the requirement for approval for at least so long as that discussion lasts.

END_OF_DOCUMENT_TOKEN_TO_BE_REPLACED

For some reason this post, specifically, gets more views wandering in off of Google than the actual first post of the series, so now there’s a link to that post right up here at the top. Have one for the third and final post, too, while we’re at it.

As established in the first post of this series, we’re looking at the espers from Final Fantasy XII and attempting to match them with the major villains of previous games in the series. This isn’t the first time this has been done, because someone already made this chart:

My premise, however, is that this chart is wrong about several of them, and in any case even for the ones about which the match is good (in some cases, even obvious), an explanation of why may be interesting to people who haven’t played every game in the series up to XII, as the original chart just offers physical comparisons, which don’t always match up well at all (compare Hashmal to Jecht, Adrammelech to Kuja, Kefka to Cuchulainn – some of these match-ups aren’t even close).

Today we’re examining the espers Zeromus, Exodus, Cuchulainn, Zalera, and Shemhazai, and we’re going to see a few disagreements with the chart in the process as well as discuss why some of these espers just don’t really match up to any of the main villains of the series at all, which won’t stop me from trying anyway.

END_OF_DOCUMENT_TOKEN_TO_BE_REPLACED

The Final Fantasy series of games doesn’t take place in the same setting (outside of same vague hints that each radically different fantasy world in the series might possibly be different planets in the same galaxy, which hardly matters when nobody has any space ships). They maintain series continuity by having similar setting elements, like unique creatures, the prominence of magic crystals (especially early in the series), and similar (though steadily evolving) combat and exploration from one game to another.

So when I say that the Final Fantasy XII espers (powerful magical allies who can be summoned to help the party in difficult fights if you complete the sidequests required to unlock them in advance) are secretly the main villains from the previous Final Fantasy games, I’m actually advancing a theory and not just sitting down and explaining the plot of the game to people who haven’t heard of it. Hopefully anyone who is only vaguely familiar with the series is caught up now.

This theory is nothing new. Final Fantasy XII came out over a decade ago. The idea that many Final Fantasy XII espers are based on bosses from previous games is immediately obvious to anyone who’s played those previous games, and several of the others fit in fairly easily if you look closely. Someone took that close look, then plugged in the gaps with any unused bosses from the remaining games, and made this chart:

This chart is wrong. I mean, obviously. If this chart were correct I’d just be saying “hey guys, look at this cool chart.” That wouldn’t be much of a blog post. Mostly this chart is wrong because upon careful examination, there are a few espers that just don’t neatly line up with any bosses and vice-versa, and ultimately the idea that each previous game in the series was intentionally represented by an esper was probably unintentional. Rather, the FFXII dev team probably just used the side quest unlockable espers as an opportunity to make lots of references back to earlier games without bogging down the main plot with callbacks. It’s like the Gilgamesh side quest is a reference to FFV overall and also has references to III (sort of), VII, VIII, IX, X, and XII itself. That’s simultaneously overflowing with references to earlier games in the series while not being anything close to exhaustive.

The espers to bosses lineup is still close enough that you can make a pretty good fit, though, so I’m going to go boss by boss and look at what I think the chart got right, what I think fits poorly, and occasionally lament how the chart’s fit is poor but there’s not actually any better options amongst the espers in the game.

END_OF_DOCUMENT_TOKEN_TO_BE_REPLACED

Maybe it’s just my recent Darkest Dungeon binging giving me a general mood of despair, but I can’t help but feel like this whole “post a day” affair has basically just produced what this video is satirizing:

Borderlands takes place in purgatory. Everyone is completely immortal thanks to the New-U stations, right up until they aren’t, which always comes at a dramatic moment. The only people who get to actually leave are the ones who’ve either atoned for their sins or proven irredeemable and been condemned to Hell.

Bully takes place in purgatory, which is why most of the cliques seem to be from the 80s, the greasers are clearly from the 50s, but the townies have a much more 90s vibe to them. Teenagers who were pretty rotten, but too young to be condemned to Hell for it, are sent to Bullworth until they have paid for their sins or succumbed to them. The game takes place sometime in the 90s, with the latest batch of lost souls being sent down midway through the game, which is why the town only opens up partway through and all students are supernaturally held within the school building until then. All adults in the town are either angels or demons sent to encourage the children to redemption, tempt them to damnation, or just to maintain the security of the purgatorial prison.

Baldur’s Gate takes place in purgatory, and it’s all a big metaphor for struggling with the evil inside, with Bhaal representing damnation and the one mentor guy being an angel sent to guide the character to redemption.

The Final Fantasy series takes place in purgatory. Sometimes characters are deposited into a “home village” with fabricated memories of having lived there their entire life, which is burnt down about thirty minutes after arrival to explain why the characters are adrift in the world. Sometimes characters can barely remember their own backstory, slowly “remembering” the past events of their life as their blanked minds are filled in by purgatory with false lives that set them up for the moral challenges they must overcome to escape to Heaven or else succumb to and be damned. Most of the monsters and NPCs, almost always including the primary villains, are manifestations of purgatory and not actual individuals being tested, but one exception is Cid, who is always reluctant to be involved in the plot and thus never escapes the cycle. Final Fantasy VII doesn’t count because shut up.

Portal takes place in purgatory, but the plot twist is that Chell is actually a demon who’s been sent to test and torment GLaDOS, which is clearly true because of contrived symbolism pulled from five different cultures, most of which are so small and obscure that there’s no reason to believe the developers were even aware of their existence, let alone the symbolism of their mythology.

Silent Hill is just a town that wants to kill people.

Sometimes, when watching shows or playing games with my younger brother (the guy what I did the Chrono Cross let’s play with), we’d come up with fan theories for various oddities in the show, almost exclusively bizarre and tonally inconsistent and sometimes contradicted by later developments in the show, which would lead to them becoming ever more elaborate conspiracy theories to paper over all the issues (some of the best parts of that let’s play were when we were doing this, although tragically a lot of our best work in the area happened in the recordings that were lost).

This leads me to one of my favorite dumb fan theories we came up with: Batman is in purgatory.

END_OF_DOCUMENT_TOKEN_TO_BE_REPLACED

Summary: An old shack, empty but in apparently pristine condition, is home to a chessboard which can summon a daemon who will play a game with anyone who sets up the board properly. If the challenger wins, they are blessed with wealth or longevity. If the daemon wins, he takes their soul.

END_OF_DOCUMENT_TOKEN_TO_BE_REPLACED

I accidentally left out a paragraph from the rewards section of the River Cult section. I could edit it in rather than making an extra post, but then I’d pass up an opportunity to be lazy.

END_OF_DOCUMENT_TOKEN_TO_BE_REPLACED

Summary: A Chaos cult plans to flood the village and offer up the drowned corpses of its inhabitants as sacrifice to placate a summoned daemonette, whom they hope will join them as the guest of honor aboard the pleasure barge that shall sail across the submerged village and onto the Grey River.

END_OF_DOCUMENT_TOKEN_TO_BE_REPLACED

So as a follow-up to the last Dark Ages post, I’ll note that in addition to people claiming the Dark Ages didn’t exist at all, there are (allegedly) also people who claim that the Dark Ages coincides pretty much exactly to the ascension of the first Christian emperor Constantine the Great in 306 AD ongoing until the Renaissance began sometime around the early 16th century. I don’t have any contact with these people, but I know they exist, because I see dumb charts like this one:

In order to get that chart onto this blog, I first had to download it onto my computer, and now my hard drive won’t speak to me.