I’ll admit (again) to a bit of clickbaitiness in this title, in that both these games have a fair amount of depth and I haven’t explored either deeply enough to know where that depth taps out. It’s possible that Alpha Centauri is a better game at high-level play that I’m not aware of.

Here’s the thing, though: I’m not gonna find out. I don’t care if Alpha Centauri is really great at high level play, because it’s a boring slog on Specialist (difficulty 2/6) and so far as I can tell there’s no particularly good counter to the Human Hive infini-base strategy except to rush them down before they can get it going, which absolutely requires you to start within easy attack distance of them. The game has a bunch of weird, fiddly micromanagement with unit equipment that I’ve always ignored as much as possible because I’m creating dozens of units and don’t want to futz with exactly which gun each of them is holding. The differences in behavior between AI factions vanishes even on Talent (difficulty 3/6) as they all become obsessed with killing Player One even if their faction is supposed to be angled towards a diplomatic victory.

END_OF_DOCUMENT_TOKEN_TO_BE_REPLACED

I’ve written before about how every build outside of human has become an afterthought to Outside, to the point where many players who only own the Anthropocene Expansion don’t even know you can play as an animal. As a tiger main, this is kind of distressing to me, and today I’m going to talk about a related concept: The human meteor.

END_OF_DOCUMENT_TOKEN_TO_BE_REPLACED

At this point, I have played most of the Assassin’s Creed series. I never buy these games unless they’re discounted to about $20 or less, and even then only if I have nothing else to spend the money on. Money has been particularly tight recently, which means I still haven’t bought Syndicate or Origins, and I still haven’t gotten around to Unity. I think I’ve played enough of this series to offer a retrospective on where exactly things went wrong, as it is generally agreed that things went wrong. Also, rambling about video games is relatively easy content, so here we go.

END_OF_DOCUMENT_TOKEN_TO_BE_REPLACED

We here at the Hamlet have agreed to focus on restoration of the local road networks to make it easier for anyone interested in our excavations to reach us, and I’m happy to say that this has already begun to pay off! We’re receiving so many new arrivals that we’ve had to consider starting some repair work on the hotel instead, just to have enough rooms open to service to house them all. This week’s new arrivals include Maubene, who I understand is also some kind of archaeology expert, Beringar, who is another superhero of some description, and Gournai, who has a halberd. I’m not sure what her actual job is, but she appears to be from Scotland. Unfortunately, she does not appear to speak any English, although she does speak a language that I am mostly sure isn’t European. Maybe she only speaks Scottish and European?

In any case, the local clinic was reopened today, so we held an intervention for Reynauld about Denouncing Venice and managed to convince him to go to rehab there. Good thing, too, because the mayor is still obsessively denouncing at the altar at all times of day and night! I do have to echo some of my concerns about that old torture chamber I found in our family’s estate, though. Specifically, I can understand why a rehab patient might need to be kept in a room that’s equipped for other kinds of treatment, given the current state of the town and the unfortunate fact that we don’t really have a whole lot of room to go around, and any place with four walls and a bed is better than nothing right now. What concerns me is, why does the local clinic even have rooms with manacles and a reinforced steel door?

END_OF_DOCUMENT_TOKEN_TO_BE_REPLACED

In the GDC postmortem of Darkest Dungeon, one of the audience questions asked was what time the game took place in, and the response was anywhere from 500 to 1800 AD. This was weird to me, because the actual answer is roughly 1625. Now, the Darkest Dungeon guy does point to a few anachronisms that are way off from 1625, namely the generally Pictish vibe of the Hellion and the very 18th century look of the Highwayman, but both of these are matters of fashion, not tech. Fashion is wholly independent from tech, so declaring that woad paint is back in style doesn’t mean you can’t say your game takes place in 1625 anymore than putting Lovecraftian abominations somewhere in the general vicinity of Switzerland. We don’t even have any trouble calling Morrowind a medieval setting despite the fact that it doesn’t even particularly resemble anything from the real world.

Whether or not your highwaymen have knee-length coats and wear scarves isn’t ultimately that important to your setting, and you can make those kinds of choices based purely on what looks cool. No, when we ask what time things take place in, we’re talking about what technologies are available, because that changes what characters can actually do in the setting. So what tech do we see in Darkest Dungeon?

END_OF_DOCUMENT_TOKEN_TO_BE_REPLACED

I’m not super keen on how relatively easy it is to lose a party member to this one, not to mention the possibility of TPK with an unbound daemonhost lying around, but if I sleep on it I run the risk of my alarm failing and missing my post time again. Normally I’d make a joke about how this would disappoint all the non-existent readers of my blog, but at some point I picked up some number of followers who actually read my posts, though not usually these ones. So weirdly enough the posts I originally considered “actual content” have morphed into filler that my accidentally acquired audience doesn’t care about, while a subsection of the filler content I post because I can only make so many encounters a week has become the actual draw of my blog, to the extent that it has any. I always knew that posting adventure content usable by like 5% of the TTRPG community wasn’t very likely to get me a huge audience, but I didn’t expect it to underperform relatively low effort articles slapped together half on autopilot based on exploring random thoughts I have and hoping something interesting comes out. Go figure.

END_OF_DOCUMENT_TOKEN_TO_BE_REPLACED

I really need to get a new alarm.

END_OF_DOCUMENT_TOKEN_TO_BE_REPLACED

A surprising amount of my blog traffic comes from search terms like “Dark Heresy powergame psyker.” This is odd, because the one time I wrote on that subject, it was about how to twink out any concept. In D&D, combat is king and everything else is an afterthought (playing an intrigue-heavy game of D&D, while something I certainly recommend just because intrigue is fun, will not solve this problem, because it’s still true that it takes a small fraction of your character resources to become good at social skills, but it takes all of them to be good at combat skills). Dark Heresy 2 is an investigation game, though. Totally kicking ass at any one thing doesn’t automatically sort you into a higher tier than the competition. If you’re awesome at combat, great, but the team still needs to look for clues and talk to nobles, so if you’re going to powergame Dark Heresy 2, you start by figuring out what niche you’re going to fill and then you figure out what character options twink that niche out. There can’t be CoDzilla unless there was a character option so ludicrously overpowered that it let you outclass other archetypes in their own niche. This would make your one character practically a party unto themselves.

That said, those who are familiar with CoDzilla might recognize this as exactly what CoDzilla was. CoDzilla is a reference to the Cleric and Druid, two classes which, used properly, were drastically more powerful than anything else from the core books in D&D’s 3rd edition (Druid is nothing special in 5th edition and while the Cleric can pull off a decently broken bone lord build, a Wizard can do it better). They weren’t just better at killing monsters in general, they were even better at specific class niches unrelated to combat (for what little that’s worth in D&D). The Druid can’t just wreck monsters better than the Rogue, the Druid can sneak around and bypass locked doors better than the Rogue. The Cleric can’t just kill things in general, the Cleric can actually wade into melee and hack monsters to pieces as a frontline beatstick better than the Fighter can. At the point when the Druid is outsneaking the Rogue and the Cleric is outfighting the Fighter, why do we even have Rogues and Fighters?

So it’s not unreasonable to think that Dark Heresy might have a similar problem. And usually it’s some kind of magic-y kind of class or archetype who has these kinds of abilities, because when you sit down to design a magic system, what you’re deciding is not what it can do, but what it can’t. It’s magic, so it can have whatever powers you want, and people who abide by the “throw in everything cool” school of design are going to throw in a list of powers so long and so obviously better than a mundane person doing the same thing that these cast-y types can plausibly be better than every single party member at their own specialties.

So is Dark Heresy 2 actually like that? No, not even slightly.

END_OF_DOCUMENT_TOKEN_TO_BE_REPLACED

Though too distant and too busy for ongoing D&D to be remotely plausible, my younger brother isn’t, like, on Mars or anything, so we do still email each other fairly regularly. Today, he emailed me some more sketches of the characters we designed for the D&D campaign. Pics below the break.

END_OF_DOCUMENT_TOKEN_TO_BE_REPLACED

I’m reading up on writing recently, as part of my ongoing efforts to hopefully someday make a living off of that, since on size of market alone my odds are much better there than in tabletop gaming. As part of that, I dropped some pocket change on a Kindle book called “Writing to Market” which claims to help books sell better by finding underserved genres and serving them. This sounds like a reasonable strategy to me if you can find the damn things and decided it was worth $4 to see if this guy actually knows how to dowse for untapped markets.

Here is a screenshot from my Kindle app of page one, with a relevant claim highlighted:

So you can probably guess that somewhere in this book I’ve found an example that did use romance. You may not guess that it is on page two: 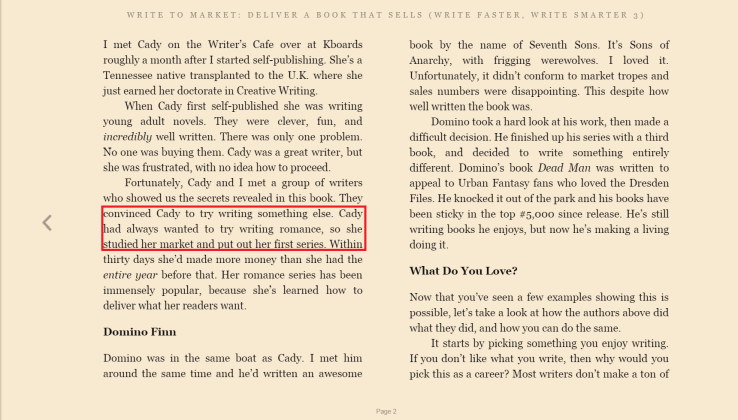 I’m going to give this guy the benefit of the doubt that he meant examples of finding a genre or something, rather than all examples, period. Even assuming it’s just slightly sloppy phrasing, though, I’m immediately more skeptical of taking writing advice from someone who let an apparent contradiction slip in separated by like five paragraphs. This isn’t a Reddit comment or a blog post. I paid him for this. Why wasn’t this caught in revision?