We here at the Hamlet have agreed to focus on restoration of the local road networks to make it easier for anyone interested in our excavations to reach us, and I’m happy to say that this has already begun to pay off! We’re receiving so many new arrivals that we’ve had to consider starting some repair work on the hotel instead, just to have enough rooms open to service to house them all. This week’s new arrivals include Maubene, who I understand is also some kind of archaeology expert, Beringar, who is another superhero of some description, and Gournai, who has a halberd. I’m not sure what her actual job is, but she appears to be from Scotland. Unfortunately, she does not appear to speak any English, although she does speak a language that I am mostly sure isn’t European. Maybe she only speaks Scottish and European?

In any case, the local clinic was reopened today, so we held an intervention for Reynauld about Denouncing Venice and managed to convince him to go to rehab there. Good thing, too, because the mayor is still obsessively denouncing at the altar at all times of day and night! I do have to echo some of my concerns about that old torture chamber I found in our family’s estate, though. Specifically, I can understand why a rehab patient might need to be kept in a room that’s equipped for other kinds of treatment, given the current state of the town and the unfortunate fact that we don’t really have a whole lot of room to go around, and any place with four walls and a bed is better than nothing right now. What concerns me is, why does the local clinic even have rooms with manacles and a reinforced steel door?

Is this a Denouncing Venice thing? From the outfits I’m pretty sure the local clinic is run by the Denunciates, which is awfully decent of them and all, but what’s with all the shackles in all their church buildings? I’ve been picking up the local language a little so I can kind of understand European, but I don’t really speak it, so Reynauld and Dismas are the only people I can ask about these kinds of things, but I don’t want to offend Reynauld by questioning a religion that’s clearly quite important to him, and Dismas just says that the Denunciates “would drown a whole city in blood if they thought it might kill one Venetian,” which is probably some kind of Europeanism that doesn’t translate too well into English.

It’s not all bad news, though! The town is really starting to pick up, since just about everyone needed some serious R&R after that encounter with the Collector. We barely escaped with our lives and had to abandon our assault on the zombie cult. At least no one died. Dufay, the super hero (and who I can now say with some confidence is somehow medically themed) went on a pub crawl, which, the only bar in town is the one at the hotel, so I’m still not sure how, Bourassa, the dog trainer, went gambling at the hotel casino, lost all his money, but apparently felt better about things afterwards? And the magician Vesci tried to take up meditation and by the end of the week was so frustrated with it that he gave up on it entirely. But was also super chill afterwards? I didn’t say I understood how the good news actually happened, just that I had some.

We made another excursion to the ruined estate, but we had to rely a lot on the newcomers. Duquesne is the only one ready for another go, so we took her and the three new guys back to the ruins to try and hunt down the zombie cult again. The place is as thick with the monsters as ever, let me tell you, but they didn’t give us nearly as much trouble this time. I really appreciated Dufay’s help last week, but I have to say, Beringar is a much better super hero. In fairness, we didn’t encounter the Collector this time, but still, things went off pretty much without a hitch. Well, bringing Duquesne to the ruins two weeks in a row didn’t go so great: 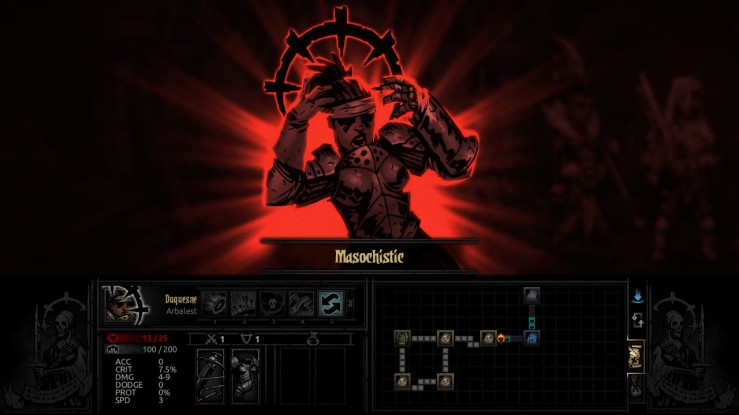 She’s expressed a pretty strong urge to get to the Denunciate church ever since we got back, but wouldn’t say why, exactly. The people here are so religious! Anyway, other than Duquesne stressing out, things went pretty well this week. I’m hopeful that we’ll have some answers about our ancestor dug up from the ruins soon, now we finally have that zombie cult problem taken care of!