As of the writing (and slightly more so as of the posting), Evermore has been soft open for several days. The proper and official opening is coming September 29th, and the first arc of the story will run until November 8th. I got into the sneak preview at Comic-Con clear back on September 8th, and as part of the bundle for buying that ticket, I also got a free ticket that I’ll be using Wednesday, September 28th, to check out the soft open.

So what is Evermore? Evermore is a theme park unlike any other, by which I do not mean “so much better than Disneyland that it deserves a category of its own,” but rather “so different from Disneyland that if you think of it as being like Disneyland you’ll get it all wrong.” If you have to pick between going to Evermore or going to Disneyland, it’s not a question of which one is better, it’s a question of whether you like LARPing better than rollercoasters. Evermore has shows, restaurants, and food stands, but it has no rides. Instead, it has actors in costume, in character, wandering about the park that you can interact with. A fairy king has fallen to corruption, and that corruption is spreading through the town fast. A couple of people are trying to figure out how to reverse or at least contain it, but no one seems to be making much progress. Dig in the right places and you’ll find some of the townspeople are handing out honest to god quests.

I’ve been following the development of Evermore from a distance for years, and I decided that for the occasion I would slap together my very first cosplay. 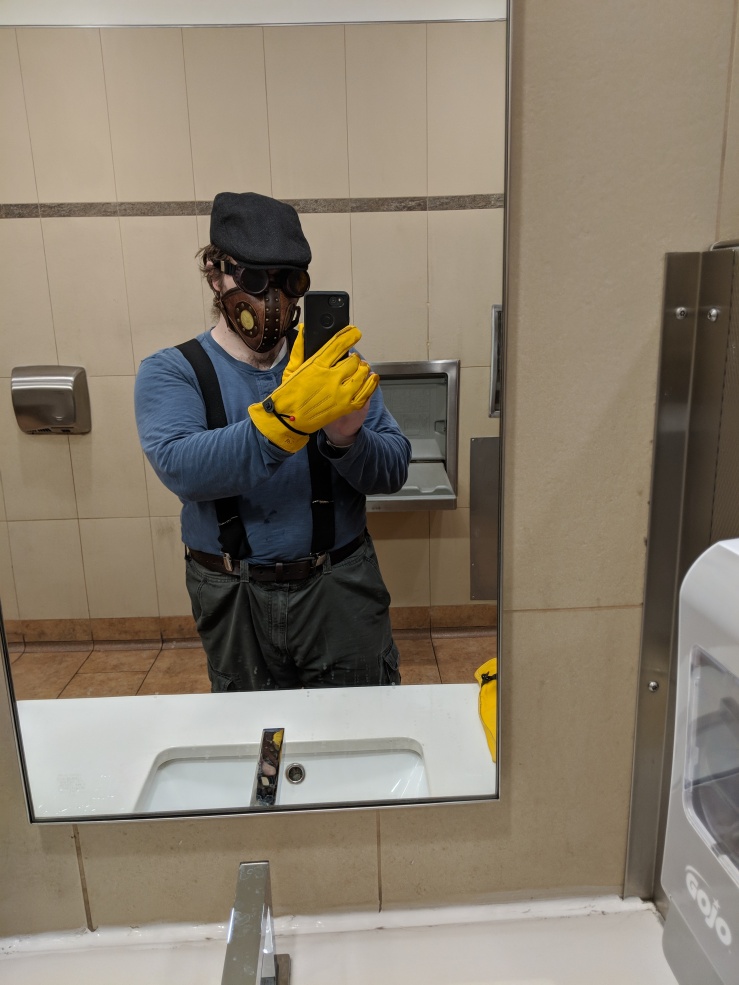 You can tell from the image here that I put a lot of effort into making an awesome mask so that I could take pictures of myself without plastering my actual face all over the internet, grabbed some suspenders and work gloves from Wal-Mart to make neck-to-waist look decent, and then just hoped no one ever noticed that from the waist down I am 1) wearing a belt that makes the suspenders completely redundant because I don’t know how to use suspenders properly and my jeans are all thrift store junk that doesn’t fit, and 2) those jeans are completely anachronistic cargo pants from my street clothes that are like sixty years out of era.

One thing Evermore seems to have a problem with is letting people know that there is a deeper story to dig out. I arrived at the park and found them serving meat pies and showing off their awesome birds. Before long, one of the bird trainers told me I should find a guy named Wiccam (Wickham?) because he’d like my mask. All the people at this entrance area were completely out of character, just talking about training birds for the park, so I thought Wiccam was just a slightly-unusually-named park employee who liked steampunk stuff. I decided to go ahead and find him because I figured one of his coworkers wouldn’t tell me to find him unless he really did really like steampunk costumes, and anyway I had nothing else to do now that I’d finished my meat pies and seen the birds which, at that point, seemed to be about the only attraction.

As I pushed deeper into the park, an actor in character invited me to keep going (the half-constructed state of the park probably necessitated this – it wasn’t clear what parts of the park were open!) and slay any monsters I found. I did not test whether or not park stuff would be okay with me hunting down one of the actors playing a ghoul and beating them to death.

If you spend any amount of time at all poking around Evermore’s website, you’re going to see Droch Lorcan sooner rather than later:

I found Droch Lorcan outside the mausoleum, an extremely brief haunted house-y attraction, and he confirmed what I’d begun to suspect: Wiccam was a character in the story and also one of the major on-ramps to the plot. If the main park is anything like the preview, i.e. an experience of exploration and investigation into a fantasy world brought to life by actors and props, then this whole “seek out Wiccam” thing should probably be communicated a bit more strongly. That said, things seem to be a bit more scheduled during the park’s proper opening, in that my ticket for Wednesday told me that I should think of the ticket time as a “show time” and that if I showed up late they’d get me in at another show time if possible, but couldn’t guarantee anything. So it does seem less “show up, wander around, find plot” in the actual opening, which is probably good for mainstream appeal but disappointing to me, personally.

I spent most of the night searching for Wiccam, and while I didn’t find him until near the end (I don’t think he was even out in the park until the last hour of the four hour preview), while searching for him I met a cast of characters too varied to be recounted here without making this blog post the most interminably dull example of sharing vacation photos, so I’ll contain myself to just these guys:

These fellas are the druids. They work for the Fey King, and are therefore the bad guys, spreading the corruption that’s consuming the town. No idea what they think they’re gonna get out of it. Maybe they’re just crazy. Their main opponents appear to be the acolytes, whom I was told to seek out by the ghoul in the mausoleum (the one I didn’t beat to death, though with the way he was blocking my path that was my first thought, followed closely by “I am not going to be the guy who punches an actor in a haunted house attraction”). These guys have a trio of raven skull masks that protect them from the corruption. They told me they know there’s a fourth one out there somewhere, but don’t know where, so, y’know, add that to the quest log.

When I did finally catch up with Wiccam, he was surrounded by a crowd, which certainly supports my suspicion that he’s a primary hub for the plot here. Unfortunately, it took me so long to find him that I wasn’t able to get much further than that. He told me that he opened the portals between Evermore and other worlds – at least one of them is Lore, where the Fey King originates from, and another Earth One, where all the park guests are showing up from – and this caused some objects to fall through. He wanted me to find them and bring them back to him so he could put them back where they belong, but I never found any (there were some more specific leads than this – it wasn’t just “find random junk and bring it to Wiccam in hopes it might be what he’s looking for” – but since those leads didn’t pan out for me I can’t really describe them without just writing a half-finished walkthrough for Evermore).

I have about a dozen pictures of Evermore, but I keep using the same two over and over again. Partly this is because my only previous experience in photography is a high school elective taken for an easy A and I’m using a phone camera. The Google Pixel 2 (a Christmas gift) has a fantastic camera for a phone, but there’s a reason beyond pretension that proper photographers still carry around dedicated cameras.

That said, I do think Evermore could stand to arrange their actors in more photogenic locations. Sometimes they’re positioned spectacularly. Bird guy and the druids were both well lit, in the sense that the lighting was good for carrying the mood, not that it was bright enough to make out lots of details. Check out these darkblood zombies, though:

Now, part of the problem here is my poor photography, sure. I’ve clumsily centered the camera on my principle subject – that white-shirted darkblood – and then just snapped a picture with no further consideration except that maybe it’d look cool with the Acolytes walking in the background, y’know, get sort of a two-layer effect going. So, yeah, “I took a class on this in high school once” is out in force.

But look at how those red mood lights are clearly exposed and have some kind of clearly anachronistic amp or something right between them. Obviously this machinery has to go somewhere, particularly for this sneak peek where the park was still two weeks even from its soft open, and three from its actual legit opening night, but my point here is that it’s almost impossible to take a picture of the darkbloods without that showing up in the shot. These darkbloods were close to immobile, mulling about this same side of the tavern for the entire evening, never going more than about ten feet from that spot. Compared to the druids above, who walk all over the place, positioning these guys such that they would photograph well should’ve been relatively easy, but instead they’re set up such that only skilled enough photographers to notice these details will be able to get good shots. Sure, any moderately competent (i.e. significantly more skilled than me) photographer can pull it off easy, but it’s 2018. Most photographs of your park that reach the public are going to be phone shots taken by guests and posted to Facebook or Twitter.

Despite that ending nitpick, I am eager to get back into the park and see how it works during the soft open. I really enjoyed the exploration and soft questing of the sneak peek and hope there’s more like that in the park’s proper opening, though I do somewhat dread that it’s going to turn out to be more like a guided tour when in full operation.