Another one in the “shameless blogging” category, this post is dedicated entirely to a brief recollection of the battle for Phlan. It’s the last session of D&D I ran for my younger brother before he left. I was running the Tyranny of Dragons campaign initially, but by the end things got…different. I squished several different adventures together into a single finale, and ran them with an improvised mass battle system.

Dragons are alarmingly fragile things in 5e. Massed archers won’t have even a little bit of difficulty in bringing them down. As such, despite having an adult green dragon on their side, the invading force had to be pretty careful about their approach. Archers in Thorn Keep (that island at the top of this picture) and Valjevo Castle (lower left of the picture), as well as on the northern walls (lower right of the picture, it’s upside down because I’m taking it from my perspective but the map is positioned for the party) are critical to keeping the dragon driven off. The Riverside District in the upper left is home to the Temple of Bane, which their clerics are guarding zealously along with a detachment of elite Black Fist mercenaries, hoping to wear the enemy forces down there before retreating across the bridge to the Dockside and Slum Districts. Said districts are guarded by fairly weak militia, everyone who hasn’t abandoned the town but instead grabbed a smithing hammer, a hunting bow, or a woodsman’s ax and decided to make a stand.

The enemy makes their initial attack. The Red Wizards of Thay and their bodyguards enter Valhingen Graveyard with a small force of lizardfolk from the Twilight Marsh. Orcs and the Cult of the Dragon attack the Riverside District in force. The dragon can be seen flying in the east, finishing up with the scattered and terrified elves of the Quivering Forest. 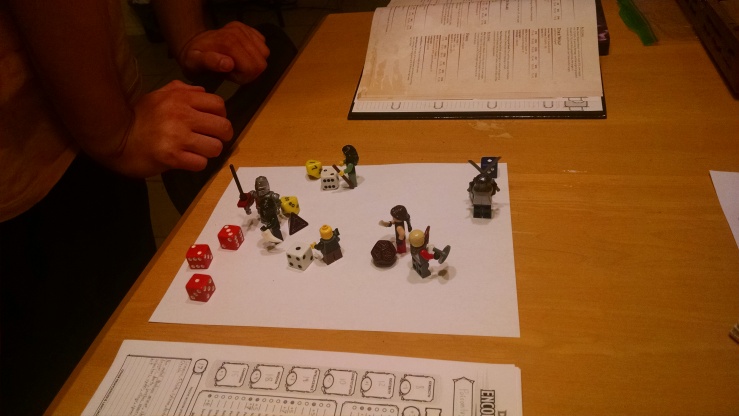 Dice represent enemies while the party members are represented by lego minifigs. I have completely forgotten who we’re fighting in this picture. Orcs? 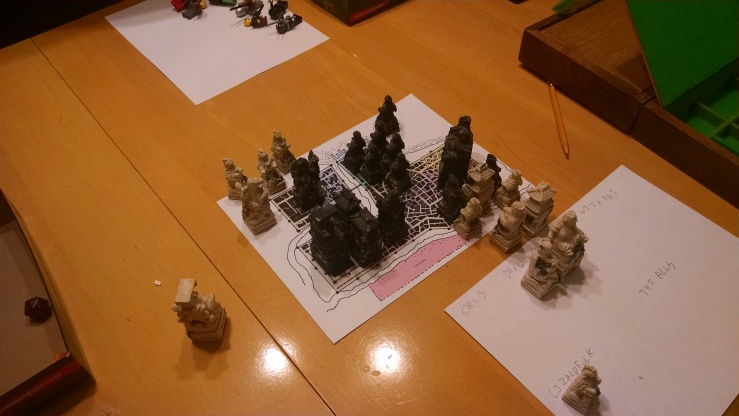 Enemies are repulsed from the Riverside Distrct, though at significant cost. As they regroup for a second attack, the Red Wizards of Thay get together and cast a ritual that builds a stone ramp directly up to the wall. The lizardfolk and several mutant thralls created by the dragon’s alliance with Slaadi of Limbo march up to attack just as the orcs and Dragon Cult renew their assault on the Riverside District. The party decides to abandon Riverside to help hold the walls, leaving behind orders to burn the bridge between Riverside and Dockside before the enemy can cross it in order to stop a breach of Riverside from turning into a breach of the city proper. 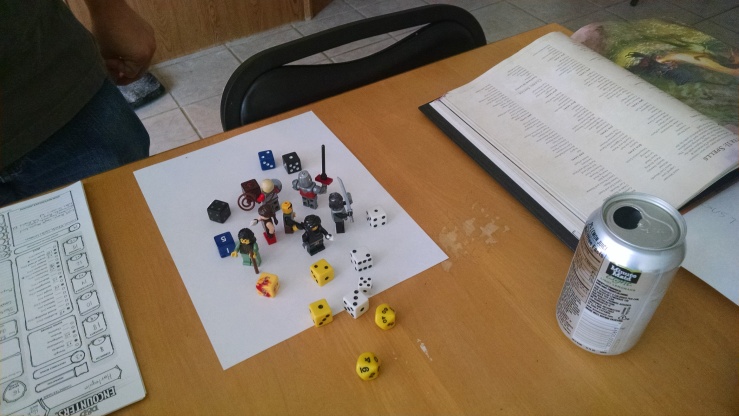 I’m pretty sure this was a fight against a bunch of thralls. Enemies came up from two sides and the party ended up forming a circle around the Rogue and bow Ranger in the middle. This fight was dicey, with a lot of party members going down and then up again and then down again and then up again. Fortunately, the party had pretty much bought out the city for healing potions prior to the battle commencing and had plenty to go around between fights. Unfortunately, the healing rate of potions is low enough that they’re hardly any good mid-fight. 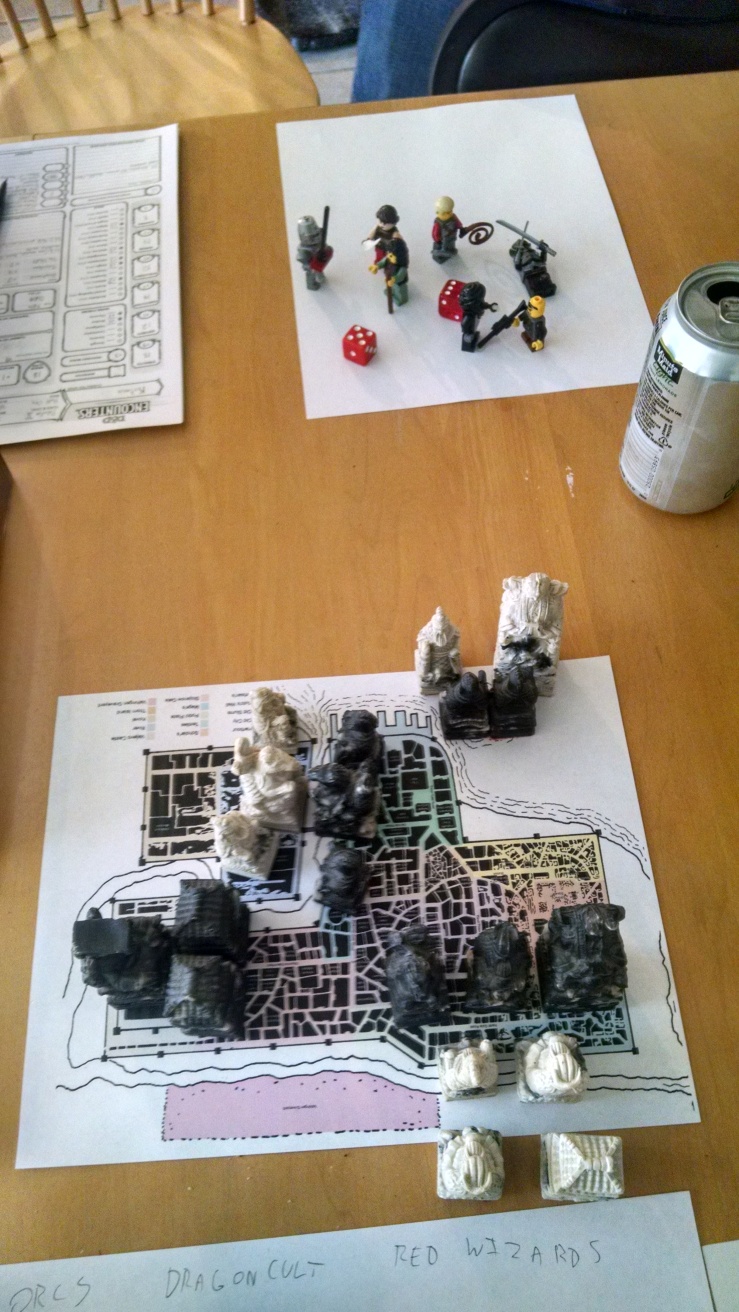 The enemy commits the entirety of their forces, now. The elites of the Dragon Cult descend on Thorn Keep with their remaining lizardfolk allies. Dragon Cult priests join the remaining thralls in a renewed attack up the ramp. The Dragon Cult’s main force and what’s left of the orcs crosses the river to attack Dockside. The party instructs the militia to reinforce Thorn Keep while they continue holding the line against the enemy on the walls. 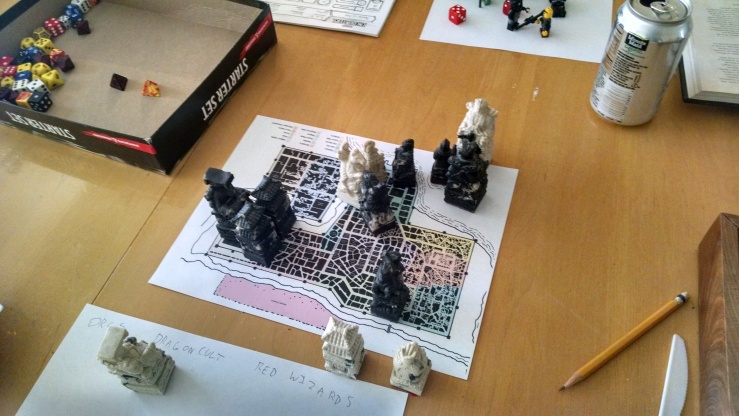 The party fights a costly battle on the walls, while defenses begin to crumble all throughout the rest of the city. The enemy has broken into Dockside, Thorn Keep is under renewed attack. Having secured the northern wall for now, the party takes their most powerful allies and runs to preserve the archers in Thorn Keep. If Thorn Keep falls, the dragon will be able to attack Dockside with impunity. 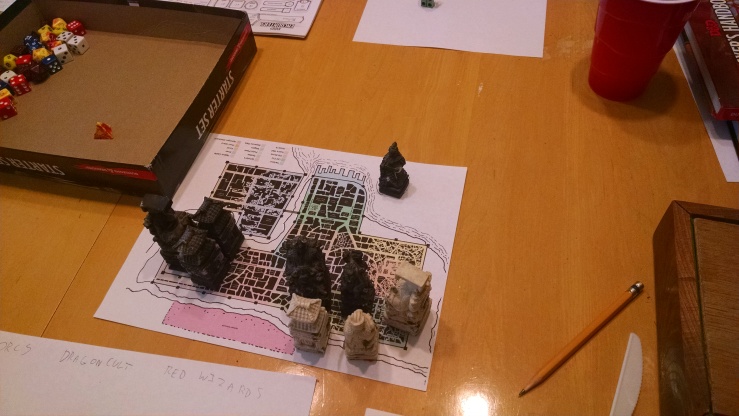 The party survives the Dragon Cult elites by the skin of their teeth. Recovering the Green Dragon Mask from the battle, they agree to entrust the mask to Madame Freona, leading what’s left of the militia from Thorn Keep (they’ve taken up the bows of the fallen Black Fist in order to preserve the Keep as effective AA). Freona promises to get this mask to the allied Harpers down south in the elf kingdom of Cormanthor if the city falls. Then they take all their greatest allies and prepare for a final battle against the Red Wizards of Thay and the dragon himself at the northern wall, whose archers have by now been cleaned out. It’s not pictured, but the Black Fist sent some of their archers (the two rooks) away from the safety of Valjevo Castle to counter the dragon. 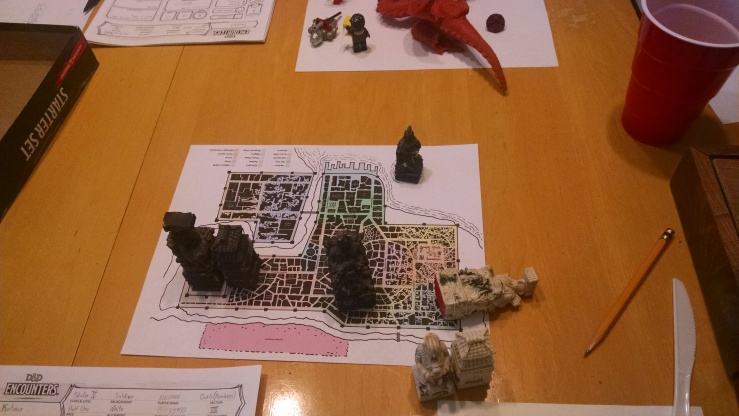 The aftermath of the battle. The dragon killed the archers, but was sufficiently weakened by their volleys that the party was able to kill him, even despite his taking full advantage of his flight to get outside the range of their attacks while waiting for his breath weapon to recharge. Seeing their trump card slain, and never having been particularly dedicated to the cause of Tiamat in the first place, the forces of Thay withdraw.

After the battle, the Ranger settled his family (the driving motivation for his avarice) in Phlan, and got a job with the Fighter in the Black Fist. There were plenty of openings.

The Druid, having slain the dragon that corrupted her grove, returned there to restore it to its former splendor.

The Rogue went off to try and find the dragon’s treasure hoard before it got picked clean by, like, goblins or whatever. The party spent pretty much all of their money on healing potions, and wound up needing most of them, so this whole campaign was a bit of a wash for her.

The Cleric continued pursuing his lukewarm vendetta against the Dragon Cult elsewhere.

The Monk, having accomplished his mission for his spooky Halloween-themed secret society, goes back to their headquarters in Baldur’s Gate for what will hopefully be a very long stretch of R&R.

The Paladin was killed outright by the dragon’s breath weapon – straight to -max health, no death saves. The city’s clergy has been pretty much totally exterminated and the party Cleric is a long way off from 5th level spells, so there was no one around to raise her. The party held a funeral for her before going their separate ways.

And that’s how my group thwarted the main plot and saved Phlan from a dragon.