When you live on Carrier Strike Group Thirteen, “vacation” means “we’ll just blow up a little bridge and call it a day.”

END_OF_DOCUMENT_TOKEN_TO_BE_REPLACED

“Come on, Commander,” Kermit was pleading, “put me on the flight! I can take it! I’m as cool as a cucumber!”

“We’re all full up, kid, take a breather,” Wedge said.

“What about that laboratory mission? Are we just going to leave that lab functioning?” Kermit asked, “they could be making chemical weapons or something!”

“It’s a secondary objective, kid, and way too far inland. You couldn’t carry enough bombs to blow it up,” Wedge said.

“What about Hunter? Load him up with the bombs. It’ll be good for him! Prove that he can bomb things just as well as Cowboy!” Kermit pleaded.

“Hunter is still convinced that the missiles have followed him back to the Coolidge and are hiding in the lower decks waiting to strike,” Wedge said, “just let it die, kid. There’ll be other missions.”

END_OF_DOCUMENT_TOKEN_TO_BE_REPLACED

Raven is leading the first flight off the Calvin Coolidge and into Libya. Launching just behind are Hunter and Cowboy with their state of the art F/A-18C Hornets, their Eyes in the sky in the AWACS, Dirk Hardpeck flying support in the EA-6B Prowler ECM plane, and air-to-air expert Waldo in the F-14 Tomcat. Their objective: To blow up Libya’s oil. The plan is to fly in from the west, where reconnaissance shows that Libyan air defenses are entirely low-altitude. The oil field is extensive. Cowboy is an air-to-ground specialist, so it goes without saying that he’ll be loaded down with high-yield guided munitions, but the field is too extensive for him to bomb on his own, so Hunter gets loaded up alongside him. It will be Waldo’s job to keep the bandits off their back while Rip Steakface keeps their radar signatures covered up with his Prowler’s ECM field. Raven’s ancient A-7 Corsair II can hardly hold onto two relatively close range AIM-9 sidewinders, while Waldo’s more modern Tomcat can carry not only a full load of eight missiles, but is also capable of mounting the longer range, radar-guided AIM-7 sparrow model. As such, Raven will be carrying some cheap unguided munitions on his Corsair II to finish any targets that Hunter and Cowboy miss. The weight of the munitions will make him a poor dogfighter on the approach, so Waldo’s going to have to keep them busy on his own.

On the same day, Wedge and Wolf are taking Kermit out to get his feet wet with a quick fighter sweep. There are 3 Mig-25s and 4 Mig-23s in the targeted squadron. Since the Sky Wolves are dumping tons of money into all the guided munitions used in the oil rig attack, Wolf decides to forego any hyper long range AIM-54 phoenix missiles and instead equip Kermit’s F-14 Tomcat with only AIM-7 sparrows and AIM-9 sidewinders, the same armament as Wedge and Wolf’s F/A-18C Hornets. They also each bring an ECM pod to keep the long range Mig-25s from downing any of them while they move into range.

It was a solid plan, a strong start to the Libyan incursion. Nothing could possibly go wrong.

END_OF_DOCUMENT_TOKEN_TO_BE_REPLACED

Hornet Leader is a solitaire tabletop game about a squadron of fighters stationed on a US carrier from 1983, the introduction of the eponymous F/A-18 Hornet, to the present, carrying out missions to defend freedom, eliminate the enemies of democracy, and liberate the shit out of the oppressed peoples of the world. This is the story of the USS Calvin Coolidge, flagship of Carrier Strike Group Thirteen, and its famous fighter squadron VA‽-101, aka the Sky Wolves.

The year is 1984 and president Ronald Reagan has decided to launch punitive strikes on Libya because of terrorism or something. Strike Group Thirteen is moving in to execute this series of surgical strikes, aerial engagements, and carpet bombings that shall under no circumstances be called a war because otherwise we’d have to talk to Congress about it and nobody wants that. Our hero goes by the callsign Kermit, fresh from training and assigned to the Sky Wolves as a pilot of an F-14 Tomcat, an older plane, but one capable of extreme long range engagements as compared to the more modern multirole F/A-18s. In this, he is paired with one of the squadron’s best pilots, Waldo, famous for being practically impossible to track on radar, especially when there’s a lot of red-and-white striped things around. 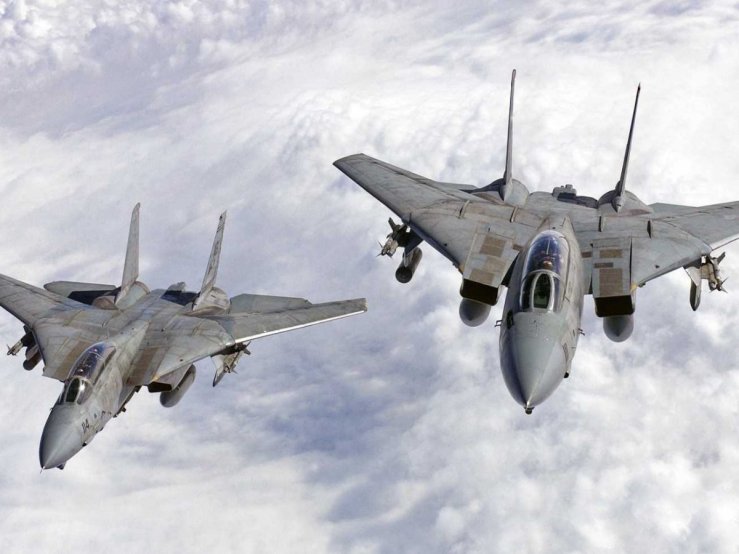