Since Bernieres’ death last week, there was a vacancy at the hotel. Not much of one, as we’ve crammed as many people into each room as possible, so really all that’s available is a couch, but still people stream in from the surrounding land. As much as I’d like to believe it’s the spirit of archaeological discovery and thirst for adventure that brings them, after spending the better part of two months here I cannot pretend that such motives receive scarce recognition in this place. What, then, draws them here?

I did not know Bernieres very well. She had a pet snake, which wandered off into the wilderness when she left, had lost her hand in some incident that always seemed impolite to ask about, and fought with a shield strapped to that arm and a spear in the other. Though I did not know her well, I would have said that no one could have replaced such a unique person in our crew.

I would have said that, before meeting the new arrival who stepped off the stage coach today.

Her clothes, the same. Her injuries, the same. She arrived with a pet snake, and while I am not a herpetologist, I swear it’s the exact same snake that left for the weald when Bernieres died there. The newcomer insisted that her name was Bernieres as well, but had no memory of meeting me or any of the others before.

I insisted the Mayor dig up Bernieres’ grave to see that she was still there.

Croc’s body has decayed so far that you can barely even identify her without the help of a forensics team and dental records, but Bernieres is only a few days dead. Her form is withered and grotesque, decomposing fluid spilling from the wounds that claimed her life, but still, it is clearly her. Besides the rictus grin and the maggots that swarm her eyes and nostrils, her face is unchanged. And yet that same face is walking about the Hamlet, with the same name, the scars of the same past!

Another mystery to be solved, then.

In any case, the new Bernieres’ presence is a welcome addition to the team as we continue scouting the Weald for the lair of the brigands who prey on the traffic in and out of town. I wish to keep my most trusted allies well-rested for when we discover them, but have nevertheless been more cautious in assembling a team this time. Vesci, the magician with the flesh-stitching trick, was a critical member of the crew. Gournai, the scotswoman, and Duquesne, that veteran with the crossbow, brought up the front and rear, respectively. A team that proved formidable enough. 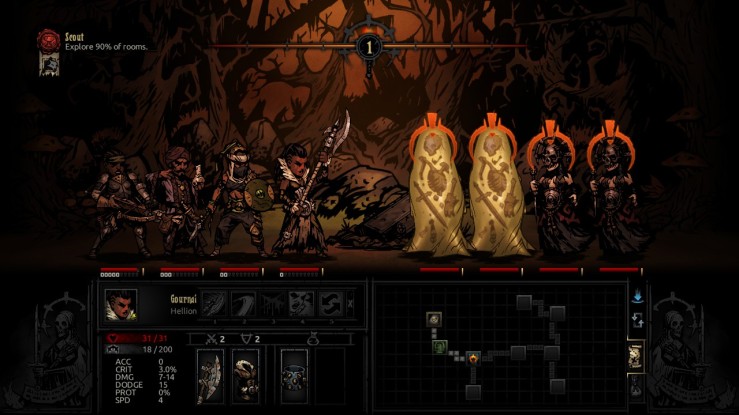 I am uncertain what these oozing creatures are, but after encountering several of them I have come to the conclusion that they are not some kind of slime zombie. The decomposing remains within them aren’t integral to the creature, just the indigestible bits left over from previous victims. What, then, are we looking at? Can a single-celled organism be macroscopic?

Regardless of what they were, what they weren’t was a formidable enemy. We have successfully located the refuge of some manner of human habitation, but from the charms and effigies scattered about I more expected the Blair Witch than bandits. I shall return to investigate with my A team next week.