Crimzon Clover: World Ignition is a bullet Hell game I usually play while listening to podcasts. I can’t really get any work done while listening to podcasts, but CGP Grey’s Hello Internet and especially Cortex have been really helpful in sorting out my workflow and actually getting things done, so I listen to those as they release even when I’m otherwise really busy. This means that I only play the game for a couple of hours once every week or two, but I do still play it regularly. Now, Crimzon Clover is a very well designed bullet Hell game whose difficulty reaches up to extreme levels, so when I say that I’ve gotten pretty good at the game, bear in mind that what that means is that I can almost beat the game without continues on the lower (of two) difficulty. I’ve actually made it a rule not to play with continues on any difficulty setting, because the game is actually quite trivial if you do. You can just hold the attack button down and you will eventually overcome everything, because there is no limit to the number of continues. You’d be limited by quarters if you went to Japan and found this game in an arcade, but I got it on Steam as part of a Humble Bundle so I can, technically, beat the game on any difficulty by taping down the z-key and going out to lunch. That’s not sporting, though, so single continue playthrough it is.

Now, the game is a respectably difficult bullet Hell by the time you reach level two out of five. Even someone who’s reasonably good at bullet Hell games in general is probably not making it past level three or four on their first playthrough, or even their first couple playthroughs. There are lots of different enemy types with lots of different attack patterns and learning them takes time (although none of them are cheap insta-gibs and it is theoretically possible to beat the game on a blind playthrough, and I wouldn’t even be surprised if super hardcore bullet Hell players have managed it on the lower difficulty). What this means is that even after what Steam tells me is 38 hours play, I still hadn’t beaten the game.

So when I showed up to the start of the final level with five extra lives (that’s extras, so a total of six deaths before it’s game over), I thought I was in a pretty good place. I had gotten the final boss halfway dead with just one extra life before. If I could get to the final confrontation with two, I’d have a real chance of making this my victory run.

Now, levels 2-4 have all followed a pattern of a single mini-boss who might take one of your lives if it catches you off-guard, encountered halfway through the level. Then there’s a much harder boss at the end, who might actually give you a game over before you’ve played a couple of times and learned the patterns. Level 1 had no miniboss, and the end boss was about as hard as most levels’ mini-boss (it’s not a very hard level for anyone who isn’t brand new to bullet Hell). Level 5’s miniboss is actually an upgraded version of level 1’s end boss: 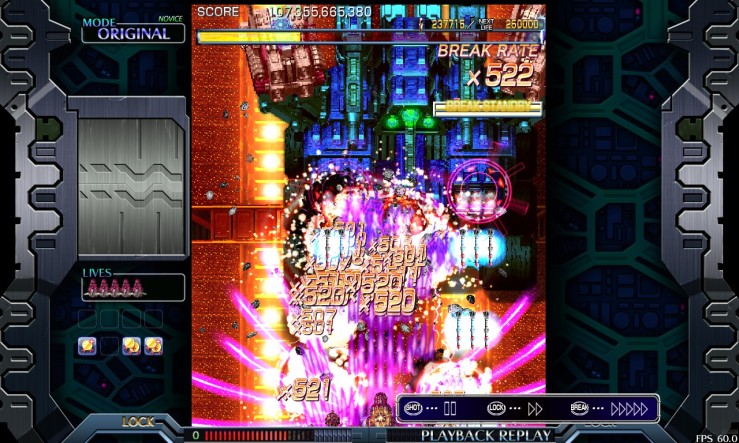 Level 5 is the point when Crimzon Clover is done messing around, though. After that miniboss, you are immediately confronted by a clone of level 2’s end boss:

This guy hasn’t received any upgrades, and in fact several of his most challenging attacks have been removed (presumably because they only shoot forwards and he’s now behind you), but since he’s behind you it’s nearly impossible to actually kill the bastard. You can destroy fragments of his legs (you can see me targeting him with my homing shot, the only way to deal damage to him) which will cause him to shoot fewer attacks. I’ve never managed to actually blow him up, but after a while you leave the corridor he chases you through and emerge to confront the new and improved version of the level 3 boss.

This version actually received a serious downgrade. They have only one attack pattern, which is a slightly easier to dodge version of the original level 3 bosses’ hardest pattern, but they make up for it by hitting you with three of them in a row and giving each of them a bunch of little tanks (mostly reduced to scrap metal in this screenshot) who fire a few extra shots at you just to make the incredibly small gap where you can squeeze through the attack pattern even narrower.

They give the level 4 boss a miss and after this boss rush drop you straight into a fight with the level 5 boss, which the Steam achievement tells me is called Gorgoneion.

If you’ve been keeping an eye on my lives, you’ll notice that beating the level 1 boss redux actually gave me enough stars for a sixth extra life, and then I lost two to the boss rush at the end. So I walked into this fight with two more lives than I felt I needed to defeat the last boss. The problem here was, this guy isn’t actually the last boss. I needed to get at least two of those extra lives through long enough to reach the last last boss after him.

And I totally did. At this point I felt pretty good about myself. All I had to do was keep my cool and pull through the constant barrage of laser fire my evil doppleganger here spits out, and I should be able to pull it off. I ended up losing exactly as many lives as last time, just two, leaving me with three lives to spare when I finally reduced his health bar down to nothing.

At which point it transpired that this was not his final form.

The bastard shaved off two of my lives after only losing half of his own health, although the first one is because he caught me off guard with homing shots pretty much exactly like my own except that I’m Player One and nobody else but me is supposed to have homing shots, dammit. Fortunately they’re not too hard to dodge if you accept that you aren’t going to do any damage to him in return during that phase, and he won’t take advantage of that by remaining in that phase forever.

It wasn’t long before I was ready to play the final card up my sleeve, and he didn’t have enough health left to get through it. 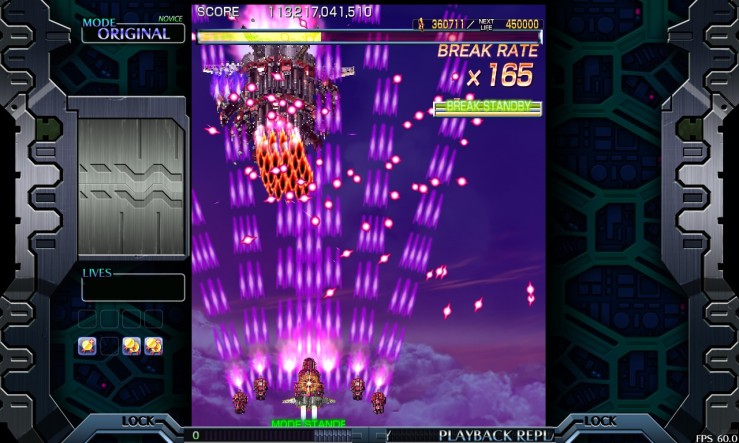 You see that break meter in the upper right? The one that currently reads BREAK STANDBY? That’s the meter for my ultimate attack. It slowly fills up whenever I shoot something, and there’s some weird quirks to managing it properly, but what matters is that not only is the top bar full, but so is the bottom bar, which means I’m ready to bust out a double-length, double power ultimate that will drastically increase the damage of my shots while also slightly increasing their spread – and that spread covers nearly the entire screen already, so if I can stay even slightly centered, that ultimate should be enough to do the bastard in. Best part, I get to be invincible for about a full second when I trigger the ultimate and then for another full second when I trigger the double ultimate. Two seconds of invincibility doesn’t sound like much, but it’s enough to cross straight through a barrage of lasers that is otherwise backing me into a corner.

So I trigger my ultimate, and so does he. 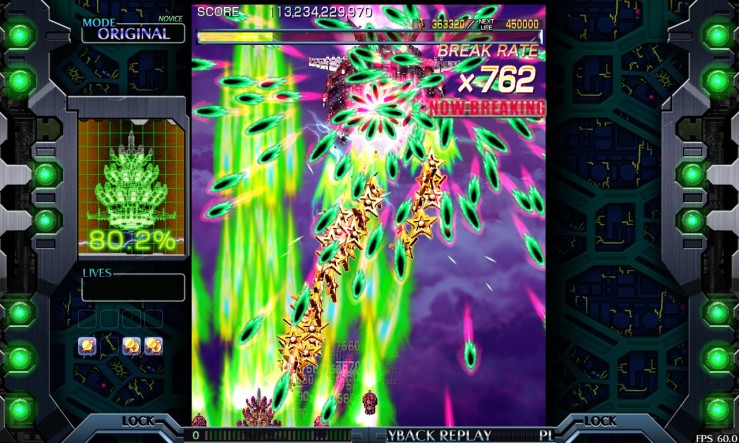 His ultimate backs me into a corner again almost immediately, where only a tiny fraction of my bullet spread is hitting him. Looking back at the replay to get these screenshots it doesn’t look like the pattern is even too difficult to dodge. What it was, was something new that caught me off guard when I had no lives left in reserve.