This week, we’re finally starting to get some answers.

While poring over documents recovered from last week’s expeditions, we found a few that appear to be scraps of our ancestor’s journal. Knowing the importance of this kind of thing to genealogy projects, I badgered Dismas into helping me translate it from European to English. I’m only dealing with fragments and my European isn’t nearly advanced enough to understand the original text (although I am getting pretty good at understanding conversations around the Hamlet, I’m happy to report!), so maybe I’m missing something in translation, but it seems like our ancestor had some kind of interest in cryonics. The text we recovered seemed innocent enough, but in light of the shambling hordes we hack through on a weekly basis, I’m afraid something may have gone terribly wrong.

Despite our successful expedition last week, we haven’t made much progress restoring the Hamlet, but I’m happy to report that new recruits continue to come flooding into the local hotel! Bavent is a retired soldier of some description, and Bernieres is, I believe, some sort of gogo dancer for nightclubs specializing in amputee fetishism. I’ll bet her story’s fascinating! Also, this guy Boislevesque.

Reynauld’s obsession with Denouncing Venice does seem to be waning. The doctors at the local clinic recommended he get some kind of special massage therapy at the hotel, where Duquesne spent the whole week gambling. The therapists seemed really informal, but we are kind of in the middle of nowhere, so I guess we have to take what we can get.

After last week, we’re pretty sure we’ve discovered where the leader of the zombie cult is hiding. He seems to be camping in one of the laboratories our ancestor used for cryonics, which only furthers my suspicion that our ancestor’s interest in immortality may have gone further than just preserving corpses and waiting for the Singularity. There was only one way to find out for sure, and everyone in the Hamlet was just as excited as I was to finally do something about all these zombies. Maybe once we clear them out we can excavate in peace.

The cult’s stronghold wouldn’t be easy to breach, so I brought some of my most reliable companions with me. Dismas is the closest thing I have to a friend right now, mainly because of the language barrier and the lack of insanity, so I wanted him along for sure. Busquent, as a Denunciate Castigator, has become a real source of inspiration for all the locals, as even the religiously unaffiliated with them at least grew up with Denouncing Venice. Beringar is easily the best super hero to come to the Hamlet so far, and this zombie cult business sure sounds like it might have a super villain behind it. And finally, I brought Bourassa, the dog whisperer, because he has a doggo.

Unsurprisingly, the place was absolutely crawling with zombies and cultists, but Busquent kept everyone’s spirits up and Beringar is capable of chopping things in half with prodigious speed. According to Dismas, a lot of people consider Beringar to be kind of useless, but I can’t see how. The dude murders basically everything in his path and got shot by about five different crossbow bolts and hardly seemed to notice. Granted, Busquent gets the credit for some of that, but still.

In any case, things did take an odd turn when we encountered some kind of mentally unwell homeless person mixed in amongst the cult.

He did not physically attack us, just shouted unsettling doom prophecies in our general direction. The zombies didn’t seem to mind his presence, but he didn’t seem especially hostile to us, either. I suspected he had, through either ingenuinty or sheer dumb luck, found some way to escape the zombies’ notice and had been hiding out among them for God knows how long. From the look of that strait jacket he was either already being treated for mental illness (not necessarily violently – Denouncing Venice hospitals seem to use restraints pretty much just because? If Reynauld’s treatment plan was anything to go by, anyway) or else just had a weird sense of fashion, but either way a few days (weeks? Months?) with only zombies for company has definitely done a number on his nerves. He was shouting in European, but from what I was able to decipher, he thinks we’re all doomed, not just us, specifically, but the world.

Anyway, this guy was clearly not dangerous and badly needed help, so I asked Dismas to communicate to the rest of the team that we should clear out the zombies around him and then see if we can talk him down, or at least find out-

I didn’t have too much time to ruminate on what to do about that before we encountered our goal. 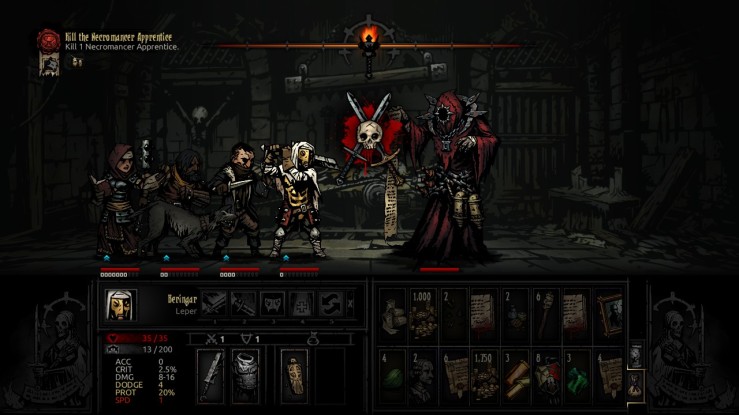 So for starters, the cult leader is like seven feet tall. On top of that, he can actually raise the dead, which probably gave him a huge leg up in terms of convincing people of his divinity. It turns out he is, himself, not actually a zombie, however. We couldn’t really tell beneath his thick robes and that weird hood thing he has, but Dismas, Bourassa, and I discovered pretty quick that he bled through his robes when cut in the right places and/or was used as a chewtoy. This led to a second discovery.

If it bleeds, we can kill it.