Ruin has come to our family.

This may come as a bit of a surprise to you, so let me explain. The good news is that our family has an ancestral estate somewhere in France or Germany or something. The bad news is that it’s built atop a portal to Hell and has been overrun by Lovecraftian abominations. I got a letter about it. It was just signed as “your ancestor,” which, wow, way to be unhelpful with the family genealogy project, buddy. Also, all of our grandparents are accounted for and none of them committed suicide in a vaguely European estate, so I’m not sure exactly where this guy fits into the family tree. Our estate is supposed to be full of family heirlooms and such, though, so I’m gonna pop in and see what’s up. I’ll bet this guy is how our family ended up marrying into the Nigerian royalty. Aside: I’m still waiting to hear back from that guy, has he maybe sent something to you by mistake? Having two hundred millions Nigerian dollars would make me feel way better about blowing my savings on the airfare to Europe. I figure that’s gotta be at least a million even if the exchange rate is yen levels of brutal.

Oh, and let me tell you, Europe’s roads? Atrocious. I don’t know what state I’m in exactly, but whoever’s governor should really allocate more funds for road construction. I know that back home we joke about how half the highway’s always blocked for construction to expand it so that it can keep up with all the extra traffic caused by half the highway always being blocked for construction, but at least when we go for charming seasonal horse drawn carriage rides we don’t end up breaking an axle on our terribly maintained streets! At least they still had a carriage left for me. Apparently they didn’t have any rental cars left? I can only kind of tell what people are saying because almost everyone here only speaks European.

Fortunately our ancestor arranged to have me met in the carriage by two locals who speak some English. Their names are Reynauld and Dismas, and I think they might be local police or something? Whatever was going on exactly, a dude jumped out at us on the road while we were walking from the wrecked carriage to the hamlet, shouted something in European, and Reynauld just straight up murdered him.

But, like, our ancestor hooked me up with this guy in the letter. That’s gotta be legit, right? So it’s probably covered by some weird European bylaw or something.

Anyway, we all got to the hamlet okay, but I gotta tell you, it’s kind of a wreck. I mean, the letter told me it had become a “festering abomination,” but I was kind of expecting, like, maybe some chavs moved in and the property values tanked or something, rather than the place having apparently never been rebuilt after it was firebombed in World War II.

I also met up with two new people who’d showed up to help excavate. I gather their names are Dufay and Busquent, but they don’t speak American like Reynauld and Dismas, so I’m not really sure what to make of them. Dufay appears to be some kind of superhero and I’m pretty sure Busquent is a Castigator in the church of Denouncing Venice, which is popular around here.

So the first thing I did was head to the wreck of what apparently used to be the manor. It’s full of zombies now, so apparently that fad is still going strong over here. Busquent seems to be as sick of the whole “zombies” thing as I am. She did not like seeing them here. I only got bits and pieces of what she was saying, but her tone was pretty hostile. 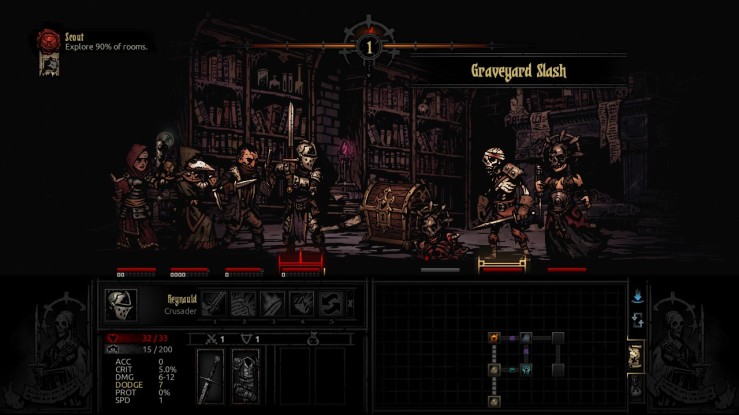 She also didn’t appreciate this chick we found squatting in our library. She definitely looks like she has some religious iconography going on, but I’m not sure what, exactly. From the way Busquent reacted, she’s probably not a Denouncer of Venice, and she’s definitely not a Boat Mormon, so that exhausts my knowledge of world religions. She was super chill about standing right in the middle of a big zombie pack, though. Maybe it’s some kind of zombie cult?

We didn’t find a whole lot that shed much light on who exactly this ancestor of ours was. The crew got pretty excited about this one stone charm we found. Man, it’s heavy, but Reynauld explains that it brings good luck to those who carry it. I figure if one of the more fragile members of the crew wants to lug it around, that’s probably for the best. Maybe it’ll be like that thing where a preacher in the Old West catches a bullet in his Bible, except instead of a Bible it’s some kind of creepy artifact of Denouncing Venice. I hope it’s from Denouncing Venice, anyway. We also found a bunch of busts, presumably of other family members, but I didn’t recognize any of them. They’re probably mostly from like the 16th century or whatever, so that’s not really surprising. Who would commission a bust of the people who went off to America, right?

Hey, it just occurred to me, didn’t both our paternal and maternal lines migrate to America in the 19th century? If this ancestor fellow is both related to us and our actual ancestor, rather than our xth cousin y times removed, and if he still lives in Europe, wouldn’t he have to be, like, a minimum 150 years old? Maybe he’s a vampire. I am, of course, joking. Vampires aren’t real. That would be ridiculous. Anyway, I should probably reinforce the barricade before the zombies get in.